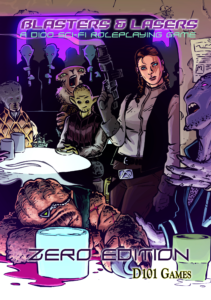 The ram has touched the wall! I’ve started work on Blasters and Lasers, the zero edition of which is due in July.

The first stage is working out what is different from Skyraiders of the Floating Realms, the fantasy game that uses the same D100 system.

The first and most obvious place to start is the Careers section. Like Skyrealms, I’m using careers as a short punchy way of detailing what skills, equipment and augmentations ( science fiction based special abilities such cyberware and psychic abilities), the characters have picked up before they became professional adventurers.

I’m posting this, it gives an idea of the scope of the game, and what sort of characters you can play.

This career covers both the Space-Fighter Ace and the Captain of a Tramp Merchant vessel.

Gangsters who operate out of the crowded metropolis, shady black-marketeers who lurk in the dark alleys of spaceports, or bands of bandits who prey upon travellers making their way across vast wilderness between settlements on sparsely inhabited worlds.

This career describes both ex-armed planetary forces, trained to operate out of spaceships, or corporate guards who protect corporate operations.

Part diplomat, part combat-ready soldier, this career covers both the upper ranks of the Imperial Fleet or the member of a command group on a respectable merchant vessel.

Characters from this career may be formal members of the planetary armed forces or a freelancer who made their living from guiding commercial and tourist parties across wild worlds. They may be attached to professional expeditions to map and explore new worlds.

An ancient order who blends hand to hand combat skills with psionics.

Individuals with enhanced psychic awareness, who either work solo as detectives and investigator, or who are part of a larger Psychic Organisation.